How Long Can We Do More With Less?

Dallas police chief said in his news conference after the shootings last week, “We’re asking cops to do too much in this country.” As I listened to him, and could see the exhaustion my heart ached for him and his colleagues, his city…well for all of us. I can empathize to a point. Having spent my career in education, my entire career has been in the context of declining budgets and increased costs. “We’ll just have to do more with less.” is the common phrase I’ve heard. We’ve all heard. Of course, most of us are not doing more with less while having to be mindful that some of the individuals we are directly working with are armed and dangerous–and want to do us harm. I cannot empathize with that kind of pressure, but hopefully we can all sympathize with it. I also cannot empathize  being fearful for my life during a routine traffic stop.

At some point we cross a tipping point where you simply cannot do more with less. For nearly the last 20 years this has been the norm by and large for anyone working in the public sector or non-profit sector. At the same time this is in the context of growing division between the haves and have-nots, and a decrease in the middle class, and increase in the working poor–which puts added pressure on the government and non-governmental agencies these individuals and families look to for support during difficult times. We starve the beast, asking these agencies to do more with less and then when they cannot, point to their inefficacy as reason to cut more. More with less and less and less.

I suspect it isn’t just in this arena that the pressure is felt. In the for-profit world the pressure is undoubtedly the same. If each quarter there is an expectation for increased profits, then this can only happen if they also do more with less and less. It defies the laws of physics to have profits grow every quarter. There simply isn’t enough raw materials, capital, or marketshare to accommodate perpetual increases. More with less is the only realistic option to appease the investors and shareholders.

This is unsustainable. It isn’t possible to continually increase the pressure and not have an eruption. I’m fearful as to what is going to happen next. I dread turning on the TV or opening up the newspaper for fear of what craziness has occurred. Where was the latest shooting? More with less and less simply continues to turn up the flame and increase the pressure on all the systems–governmental, non-profit, profit, etc.

Those older than me, or maybe more attuned to history will say we’ve done this before and we always survive and progress. The closest parallel for me is the year 1968. MLK and RFK assassinations, race riots, a “police-state” atmosphere at the Democratic National Convention, a presidential candidate running on a platform of “law and order” and authoritarianism….

Maybe we have not progressed as far as we thought we had in the last 50 years.

But now our citizens are more armed than ever. More weapons and more deadly weapons. This is one area where we have not accepted more with less unfortunately. More with more in this case. Does anyone else feel like Wile E. Coyote right now? 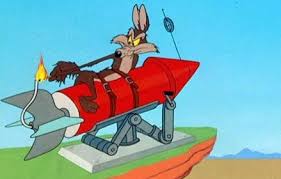 Eliza Gilkyson wrote the song “Unsustainable” to the tune of Nat King Cole’s “Unforgettable.” Here’s a link to listen: https://youtu.be/WlzYvCmHTLo

Well. That was depressing.